When we decided that we were going to India, I knew I had to ask my sister Chrissy to meet us there.  She has loved India and everything about it her whole life.  When my sister Julie heard that Chrissy was coming, she wasn’t going to be left out of the fun!  She has been practicing Yoga for the past 10 years and recently received her Yoga teacher certification, so it was the ideal vacation for her as well.  Yay!  Both of my sisters were coming to India and we were heading to a Yoga retreat to cap off the trip!  I was ecstatic at the time, and I had no idea how much their presence would mean to me, many months later after 5 months of traveling.

We looked at a variety of options for yoga retreats and settled on Little Cove Yoga Retreat.  We could not have found a better place.  At the point we decided to do this, I had never done yoga before (except for a couple of videos) so I signed up for a class and started learning all I could to prepare.  I was still very much a beginner when we arrived, and my sister Julie was very experienced, but we both were able to grow and learn throughout our stay.

Before we went to the retreat we traveled through northern India together (see this post for more on that part of our trip), practicing a little yoga along the way! 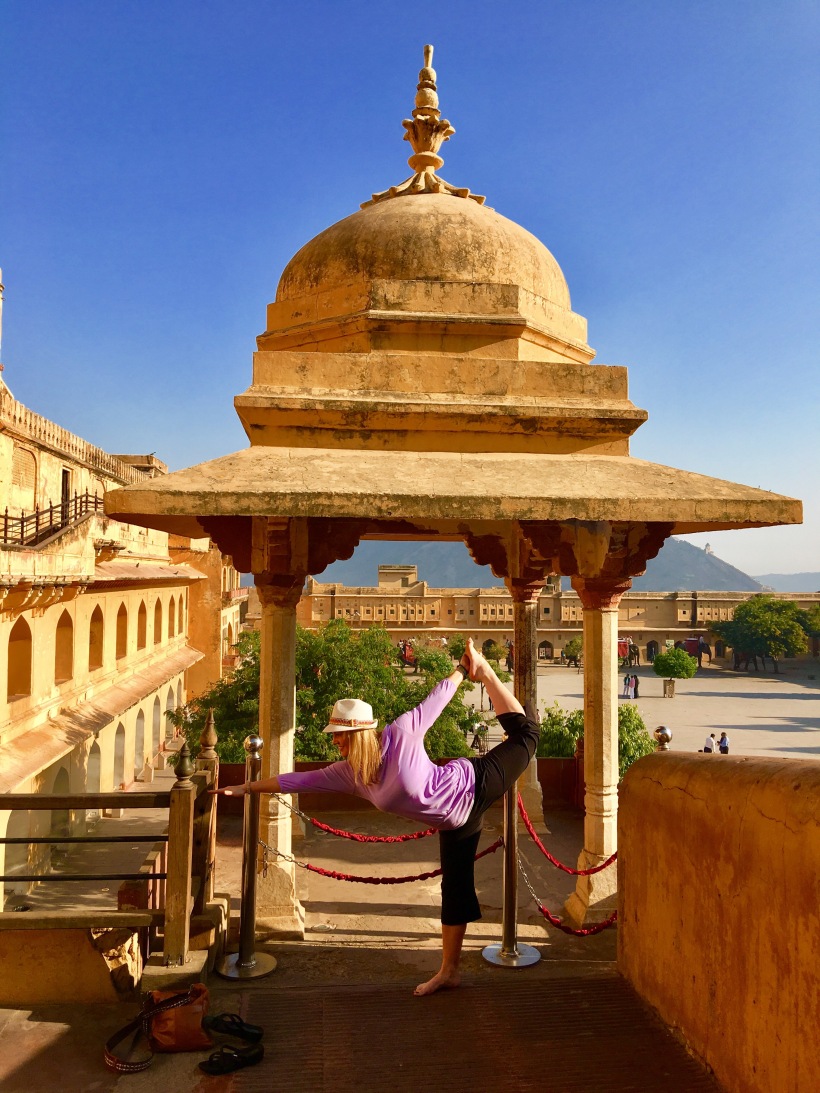 After spending two weeks in the over-stimulation that is northern India, we flew down to the Goa region and split off from Jeromy and the boys.  They went to the Marriott in Goa for a week of school, swimming, and kids club.  These are the two pictures I have during their time there.  You can tell who the photographer in the family is because I probably had hundreds of pictures to choose from in my week without them.

While they spent the week at the Marriott, Julie, Chrissy, and I headed south to Little Cola Beach in southern Goa for a week of yoga, meditation, and relaxation.  One big facilitator of my relaxation was that we didn’t have wifi.  This exit from the digital world was much needed and a quick way to get us to slow down the constant stimulation in our minds as we sought to find peace and enlightenment.

The retreat was located in southern Goa down a long dirt road on Little Cola Beach.  We were dropped off at an upper road and then hiked through the palm trees to get to our retreat. 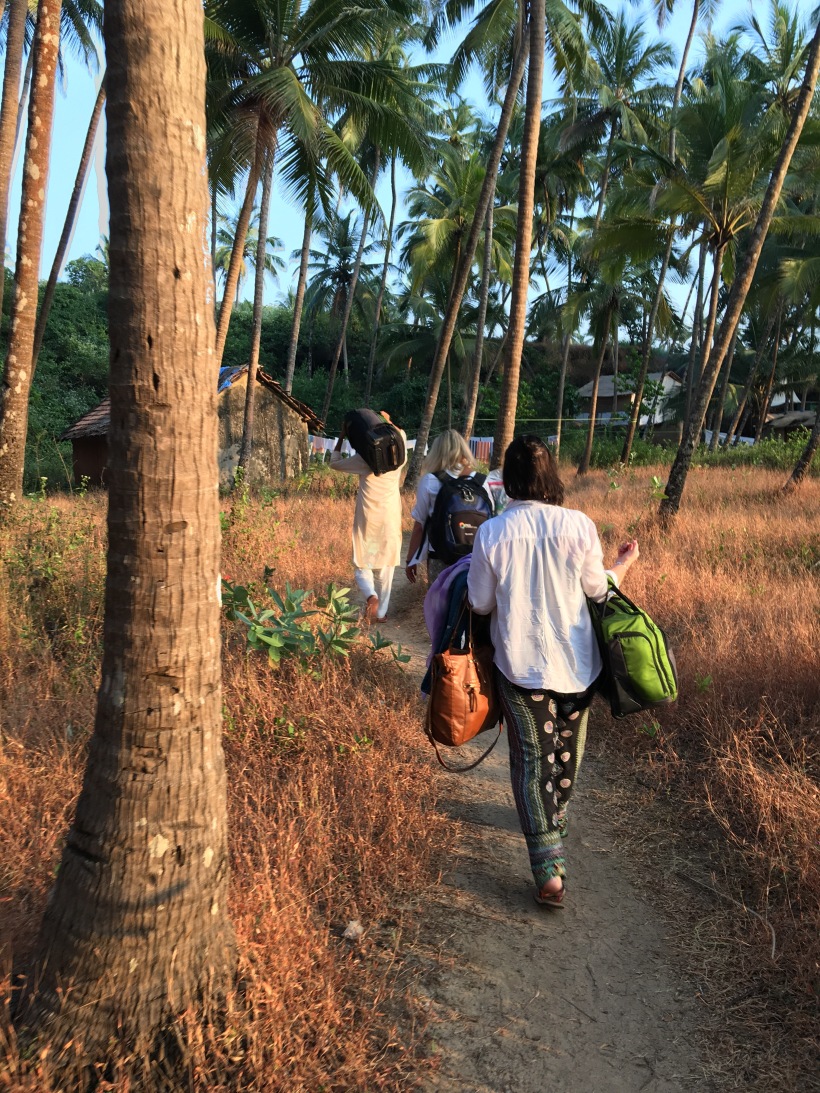 We had simple cabins right on the ocean.  There was no hot water and the walls opened to the outside.  It was a bit rustic, but that just added to the simplicity of the experience. 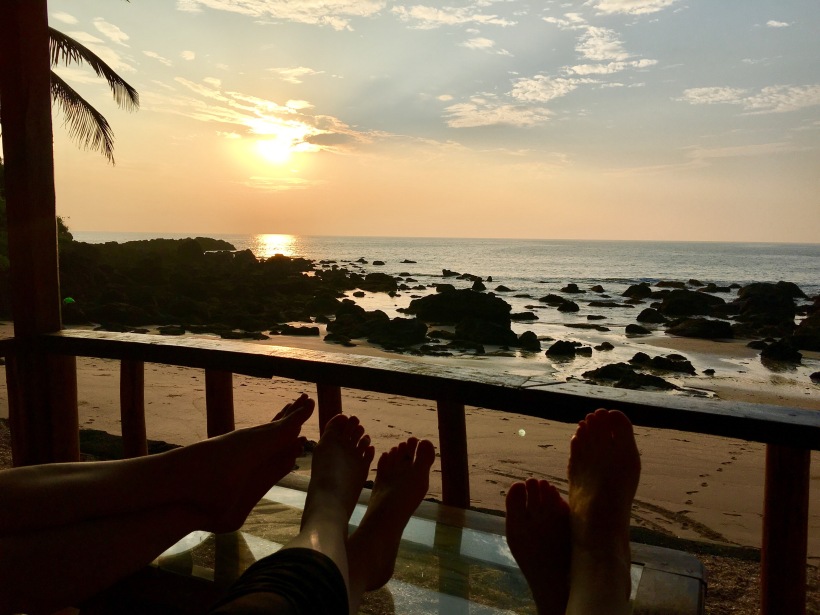 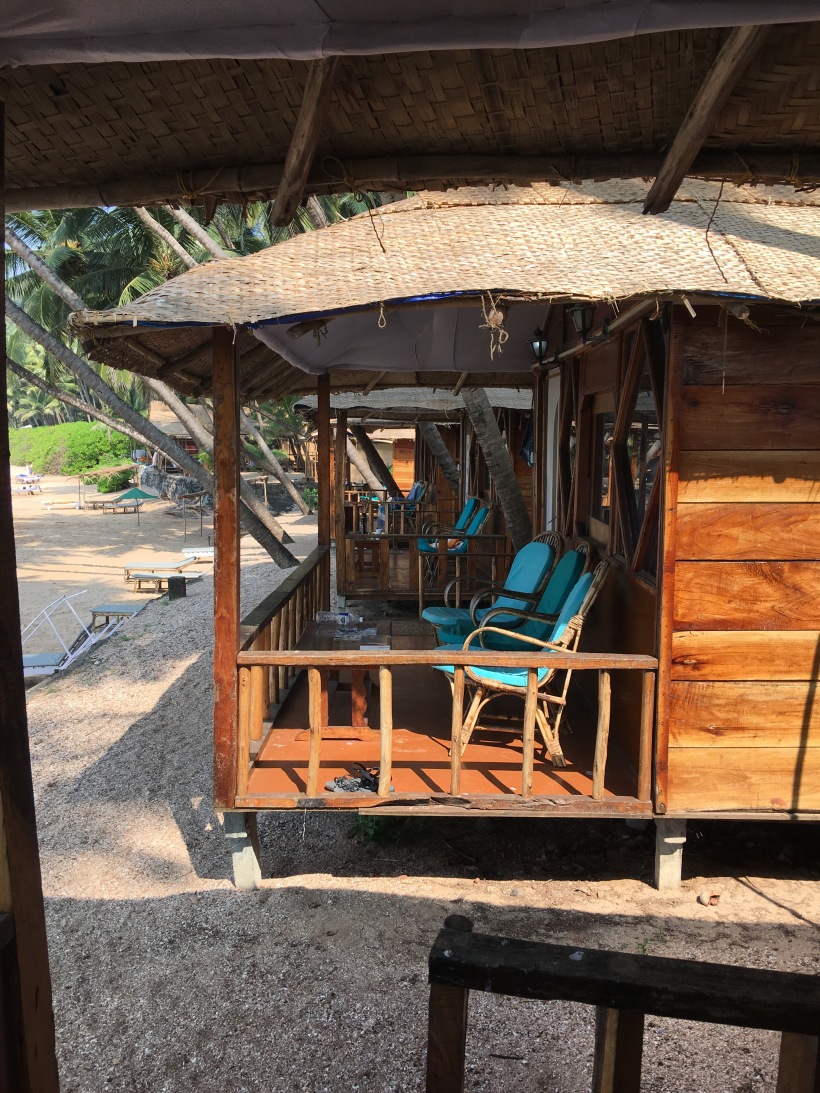 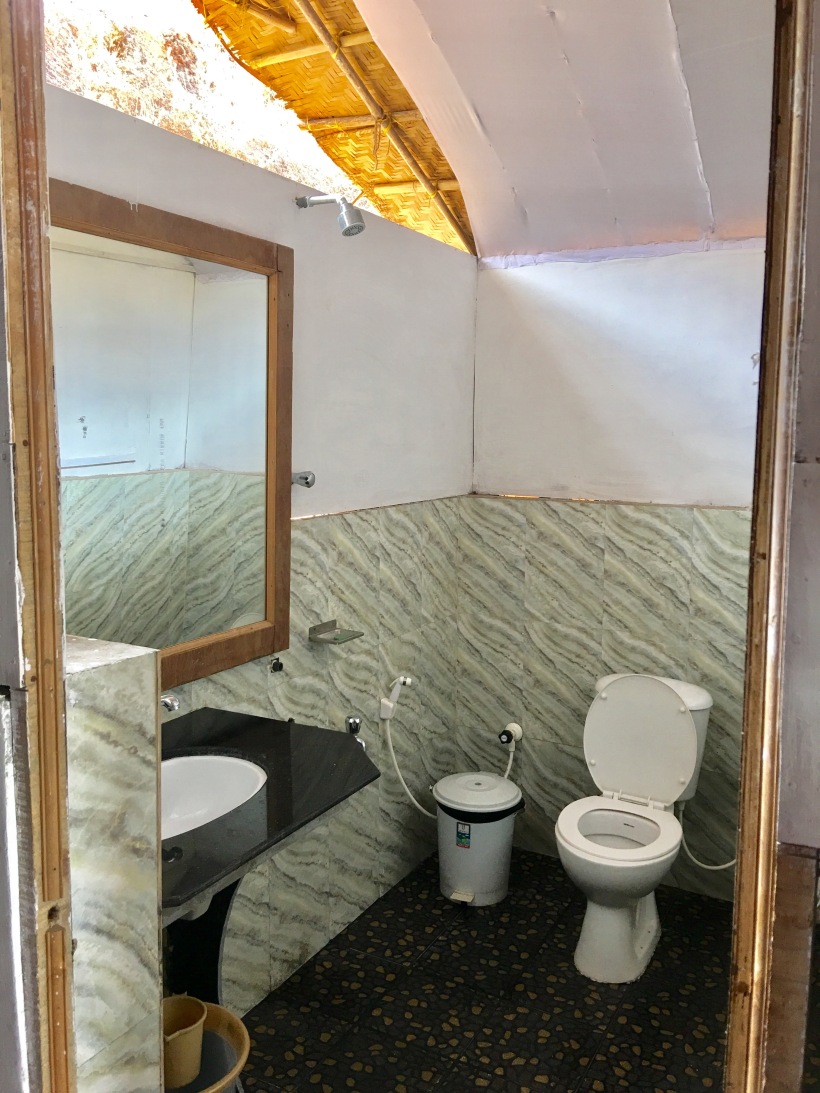 The beach itself was idyllic. It is the type of place you think of when someone says, “Close your eyes and think of the most relaxing place you can.” Golden sand, warm blue water, palm trees, huts on the beach, a fisherman fishing off the rocks, dolphins swimming in the distance…perfection. 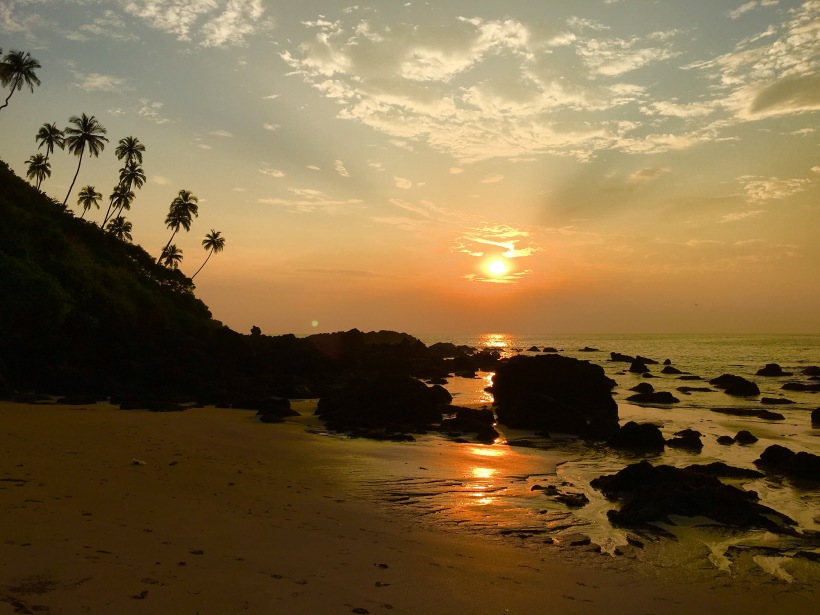 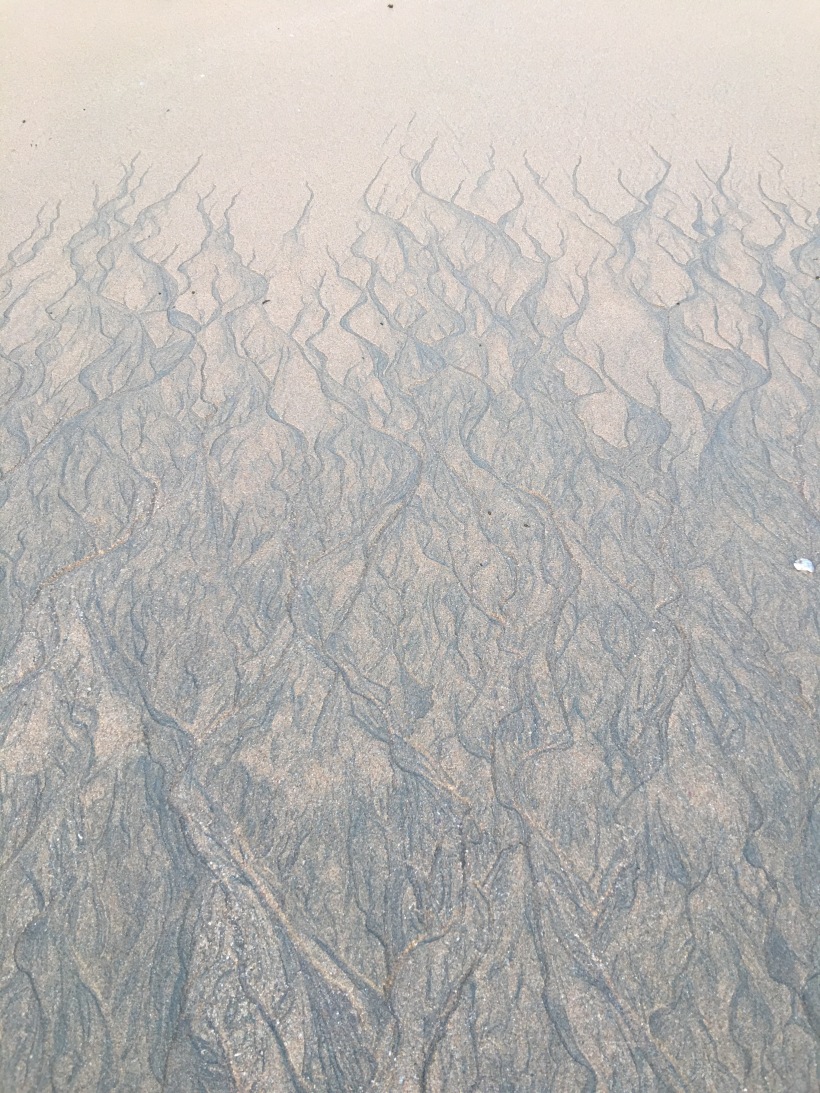 There were about 10-15 other people who were staying there at the same time as us, depending on the day.  It was fun to get to know people who traveled there from all over the world in search of peace and relaxation.

Our days followed a simple schedule…

The next day we would repeat the same thing again.  One morning we woke up early and rowed out to watch the sun rise over the mountains and search for dolphins.  We weren’t disappointed!  We saw dozens of dolphins swimming and jumping in the ocean and a beautiful sunrise. 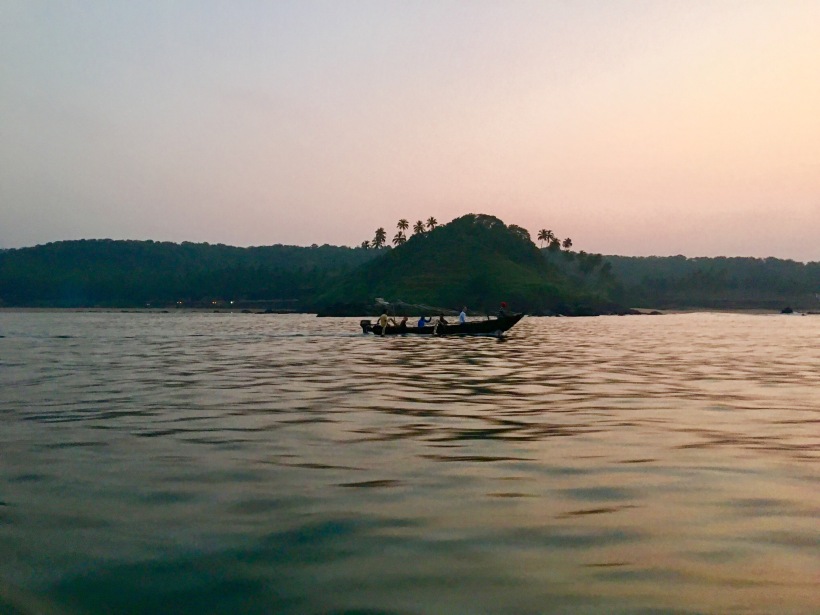 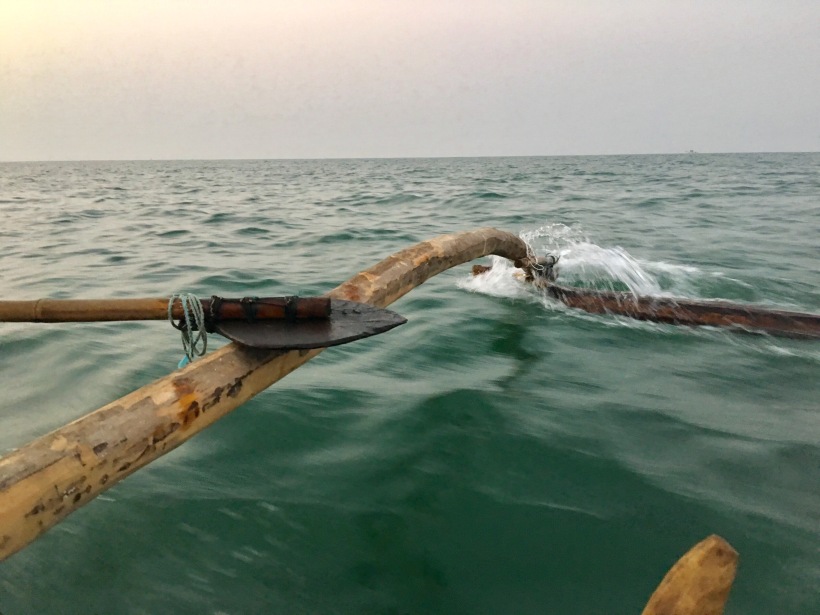 The week was a much needed break from my family because although I love to be with them, being together 24 hours a day 7 days a week can wear on a person after a while.  It was nice to be able to clear my mind and do nothing for a while with no responsibilities.  It was also so wonderful having my sisters there with me to experience it all with them.  I love them so much and will forever treasure the time in India we were able to spend together.