While it wasn’t our last stop, Panama was the last country we visited outside the United States.  Our experience there was a tale of two cities.  The first stop was visiting Panama City.   Panama City is very modern and felt the most like being in America than we had experienced in a long time.  It was fun to see familiar restaurants and shops and a modern city skyline as we drove in from the airport.  Tyler was even able to get his own fidget spinner after almost missing the entire fad while we were away!

Our main purpose for stopping off in Panama City was to see the famous Panama Canal,  a 48 mile waterway connecting the Atlantic and Pacific Oceans.  It was an engineering marvel in 1914 when it was opened and is still used today.  In 2016 the Miraflores locks were opened to allow for more and larger ships to pass through the canal.  We were able to visit two sets of locks and watch as giant ships slowly made their way through to the other side.  There was even a museum where the boys each took there turn at steering their own ship through the locks. 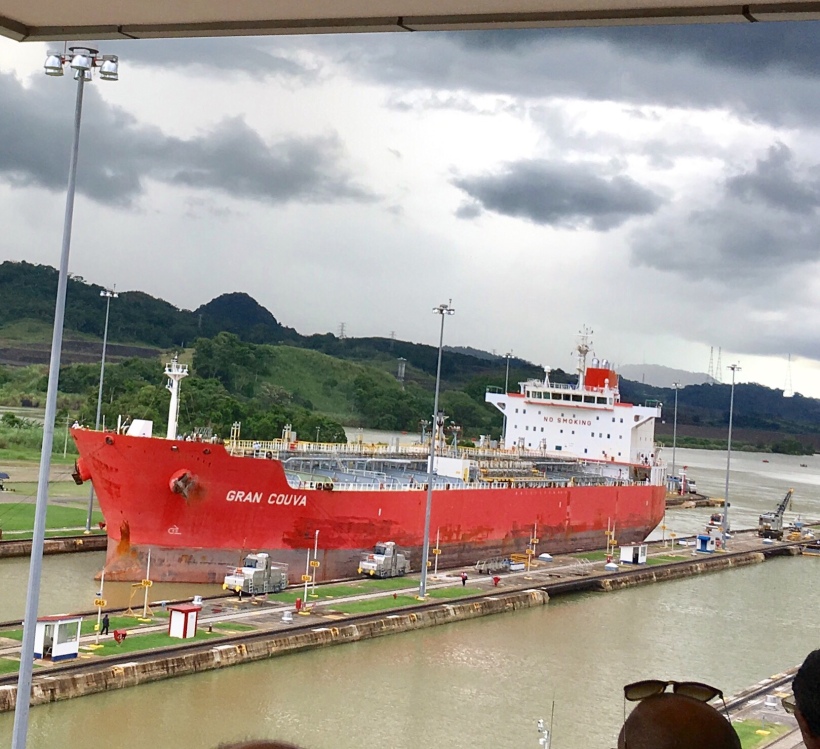 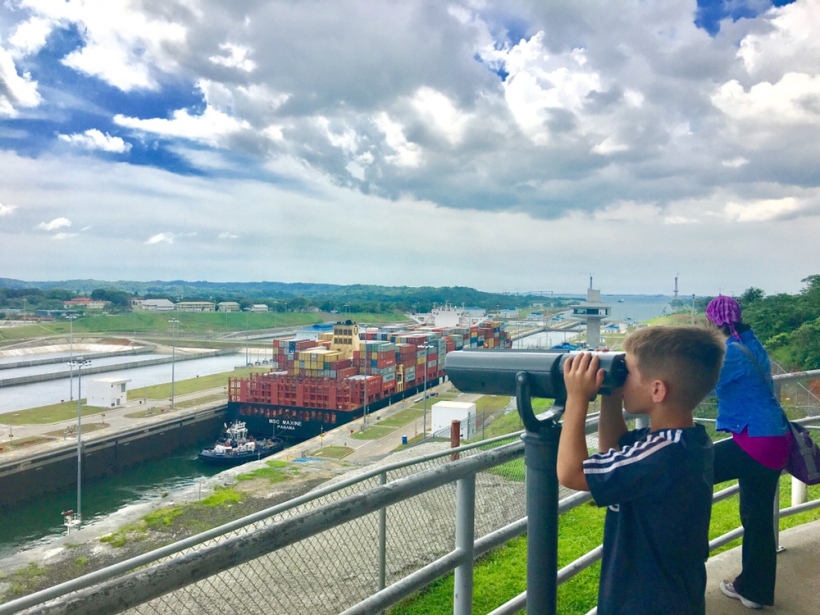 To get the most out of our short time in Panama City, we booked a tour for the day that drove us from the Pacific to the Atlantic Ocean, and back again (which really wasn’t too far).  Along the way they taught us a lot about the locks and the country of Panama.  A highlight was our boat trip on Gatun Lake (the lake that was created as part of the canal and is the largest manmade lake in the world) where we were able to see the enormous ships up close passing through to the other ocean, as well as stopping off along the way to feed some wild monkeys! 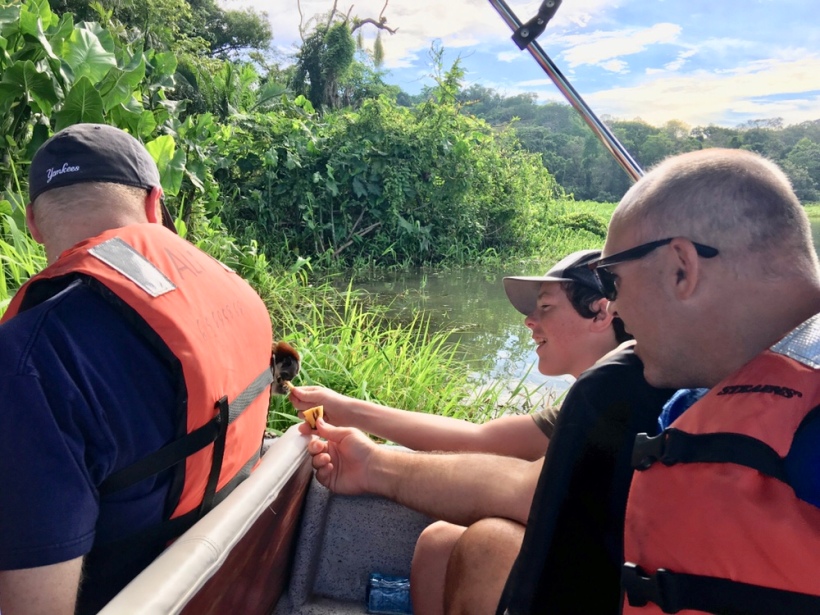 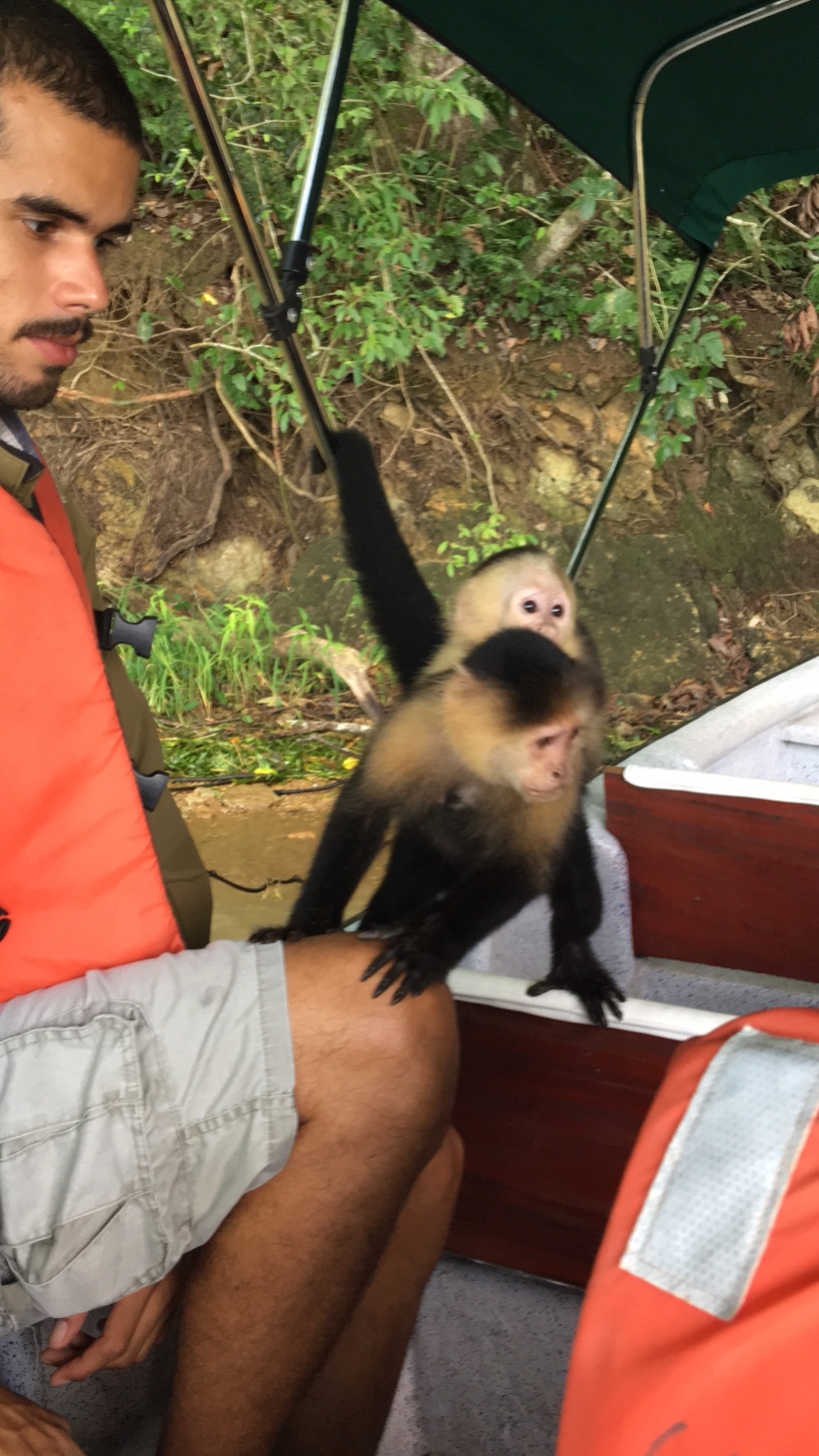 We also got to visit Fort San Lorenzo, a former Spanish stronghold against pirates.  Before the Fort was built, the Spanish protected the coastline and access to the Chagres River from a battery near the sea.  It was successful until 1670 when Captain Henry Morgan (the famous pirate) took it over in an attack and occupied it, using it as his base to attack Panama City the next year.  The Spanish then built The San Lorenzo Fort higher up the cliff in the 1680’s, which kept the pirates at bay until they abandoned it in the middle of the 18th century.  The boys had fun climbing around the old walls and seeing the cannons positioned to ward off the incoming pirates! 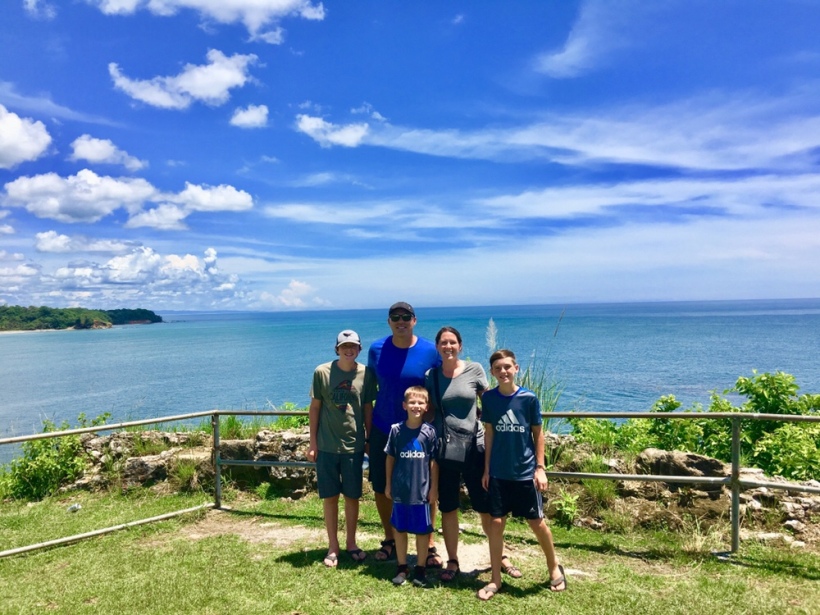 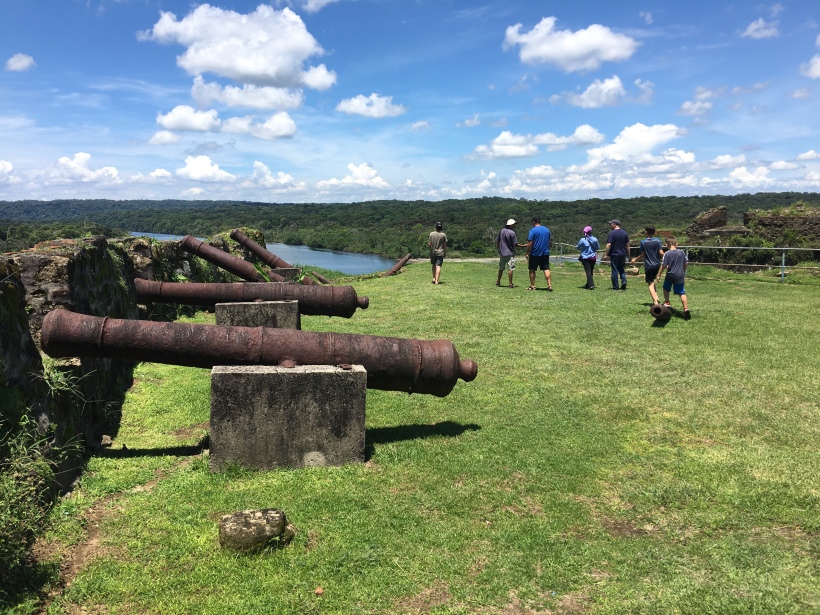 We spent a short evening exploring the old town of Panama City in the pouring rain, only stopping quickly along the way for some delicious ice cream and to try on some Panama hats! 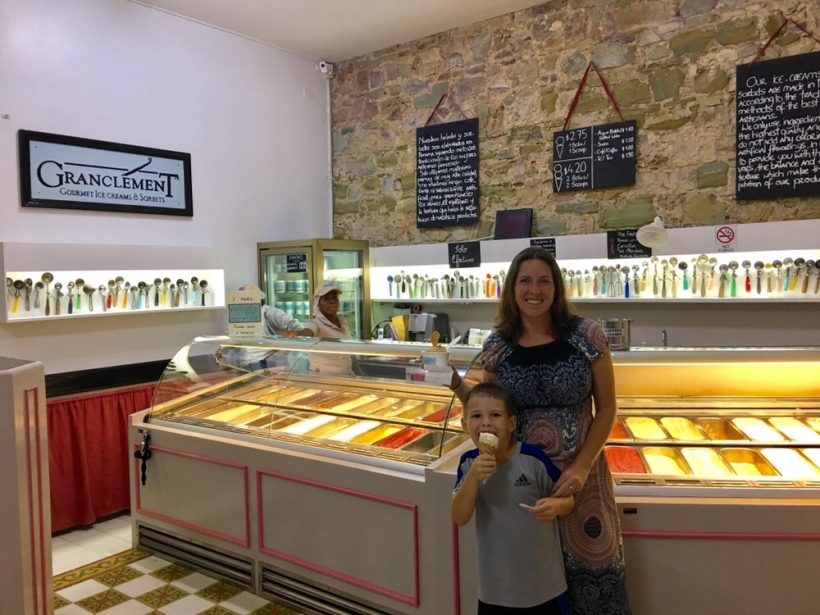 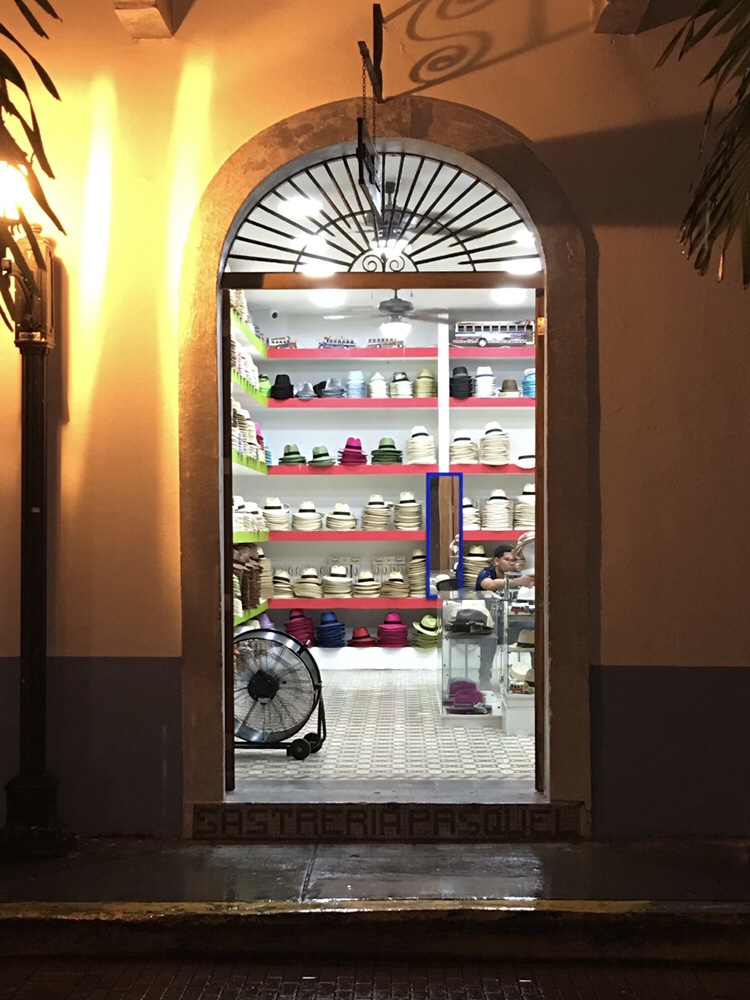 After exploring Panama City and the surrounding area for a few days, we took a small propeller plane to Bocas Del Toro to spend the last days of our trip on an island, living off the grid. 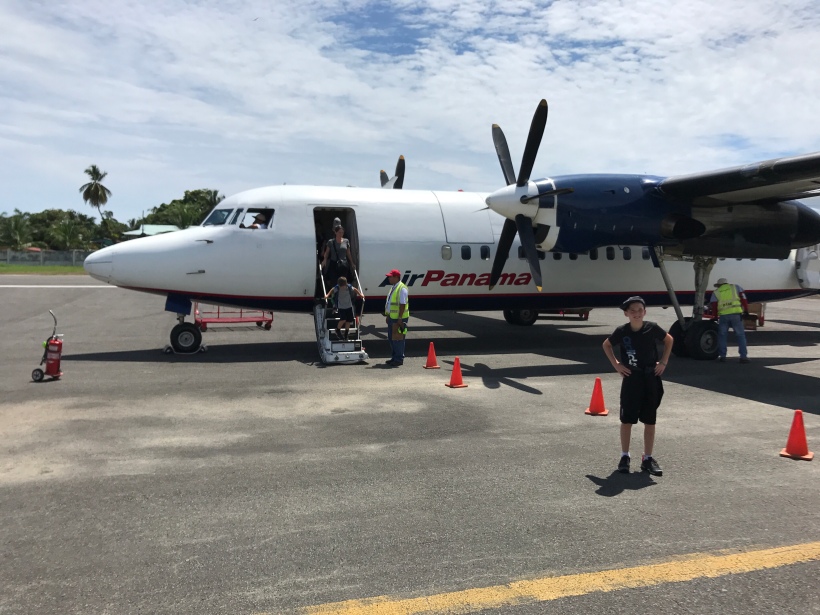 In contrast to Panama City, Bocas Del Toro, is a small archipelago of islands populated by native people living in traditional ways, as well as foreigners choosing to live off the grid.  There is also a small town there where we were able to get a drink and some food before being picked up by a boat to go to Dolphin Bay Hideaway for our final days out of the country. 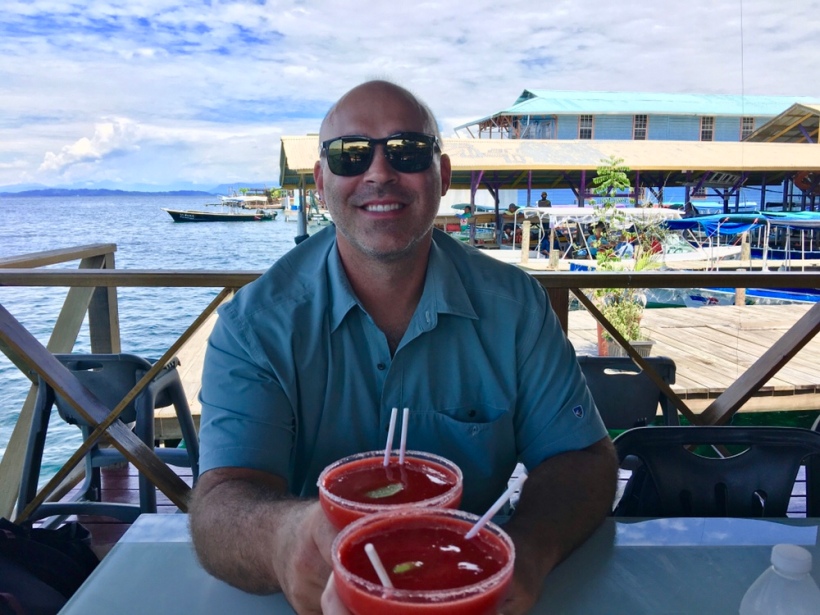 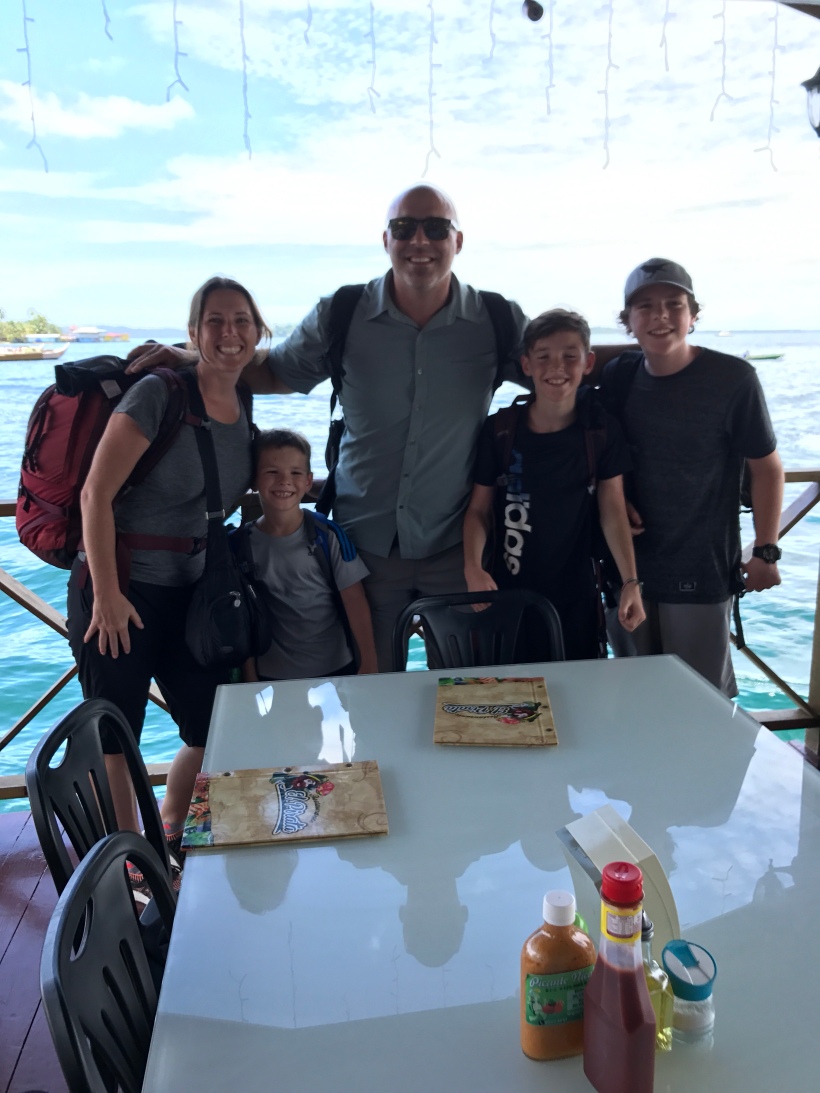 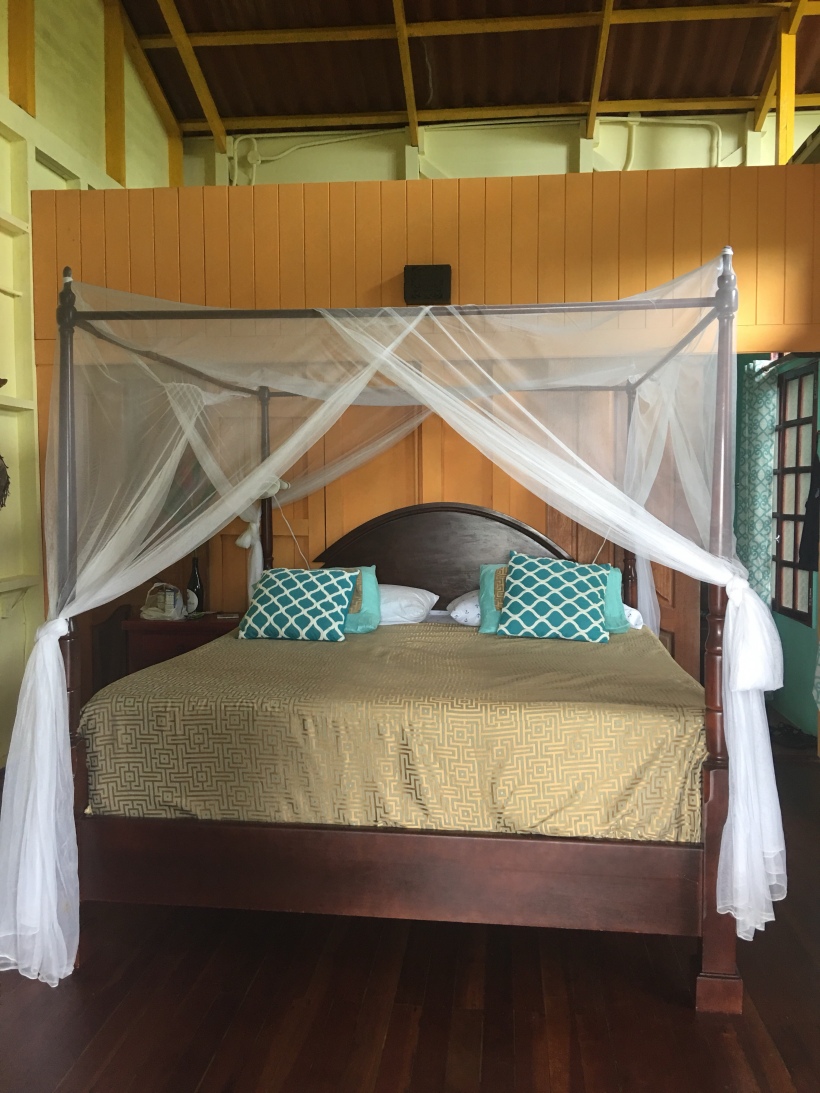 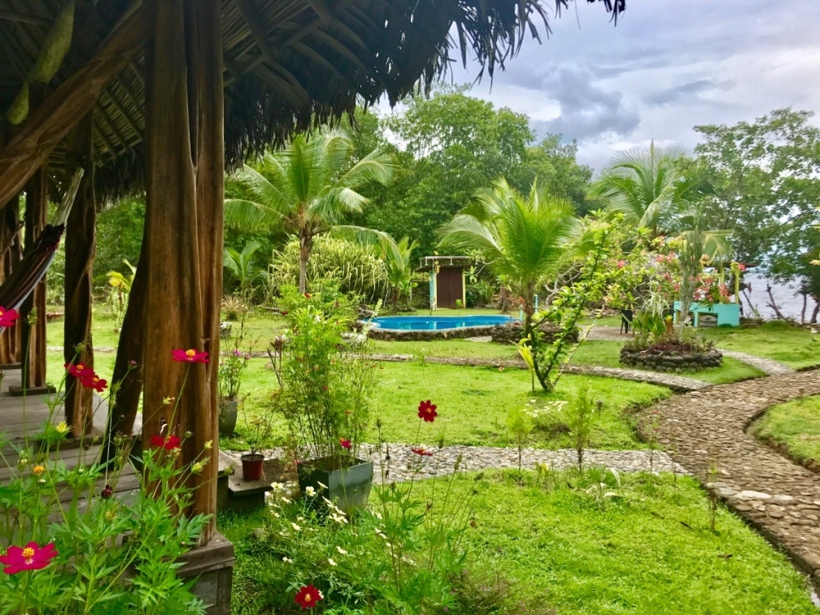 We couldn’t have picked a better place to end our trip!  It was so relaxing and the owners made us feel completely at home during our stay, catering to our pickiest child’s tastes with their delicious meals and taking us on amazing outings every day. 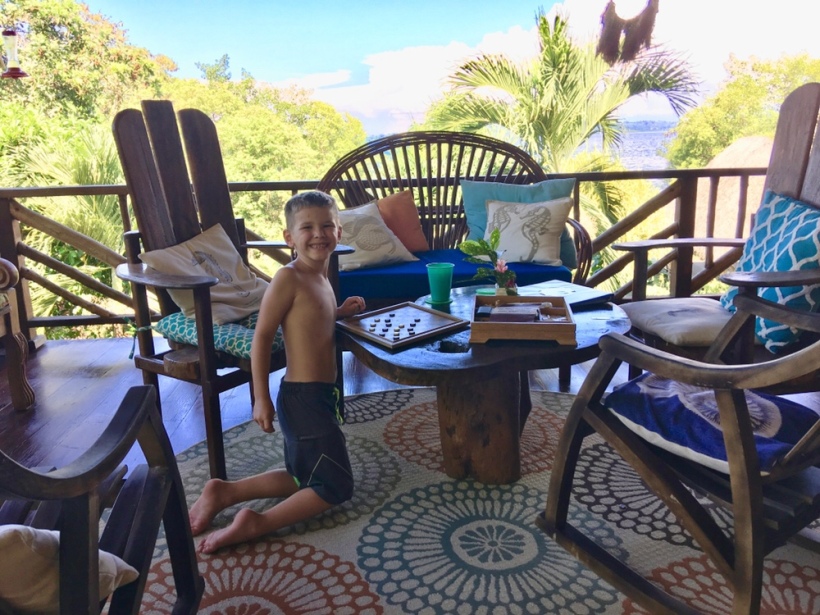 The couple who owned our resort were also Americans and it was fun to hear about what life was like living off the grid for them. After a delicious breakfast every morning we would head out on the boat to explore… 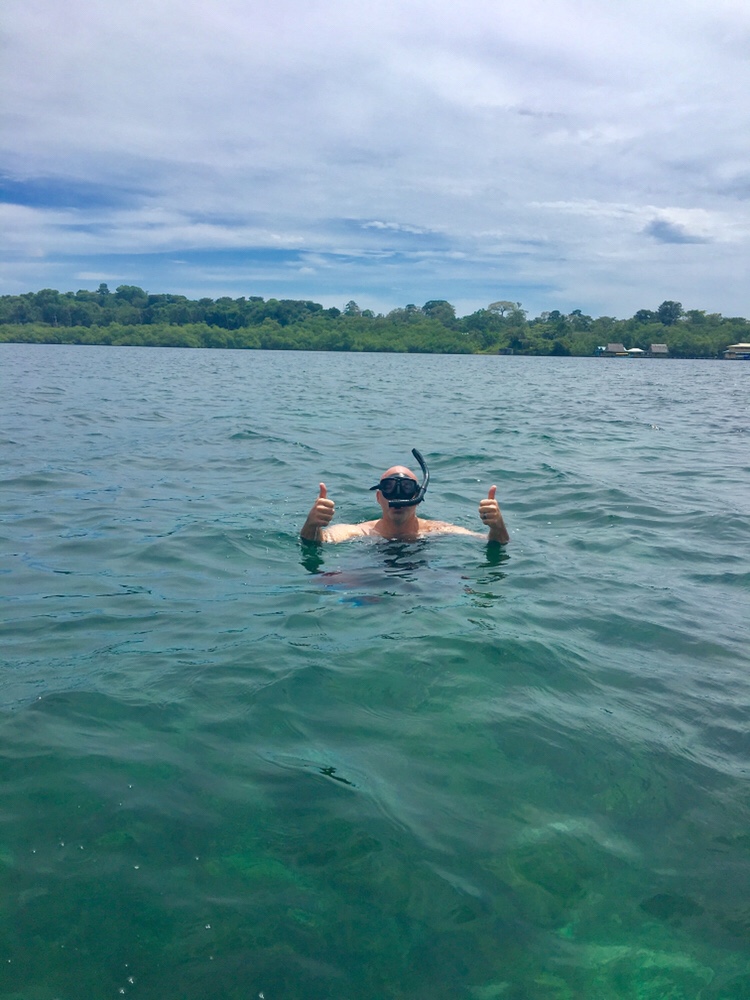 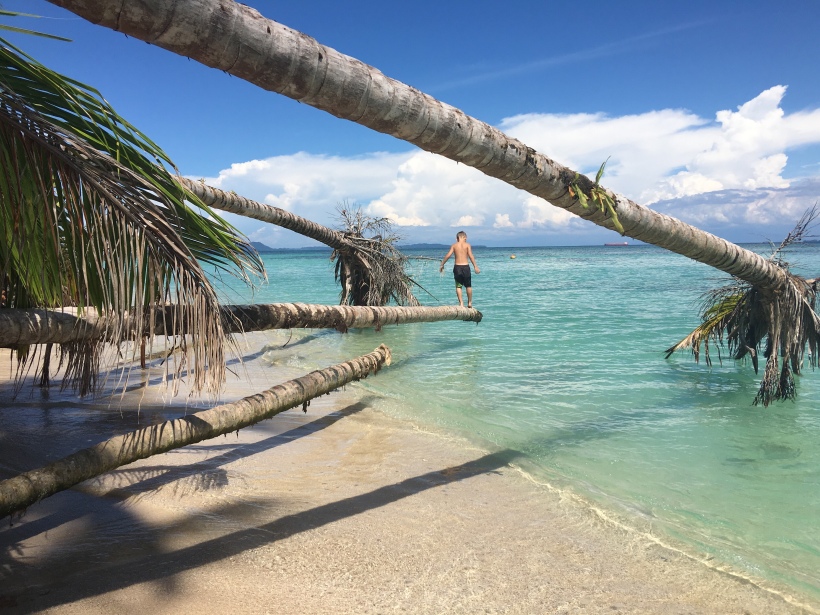 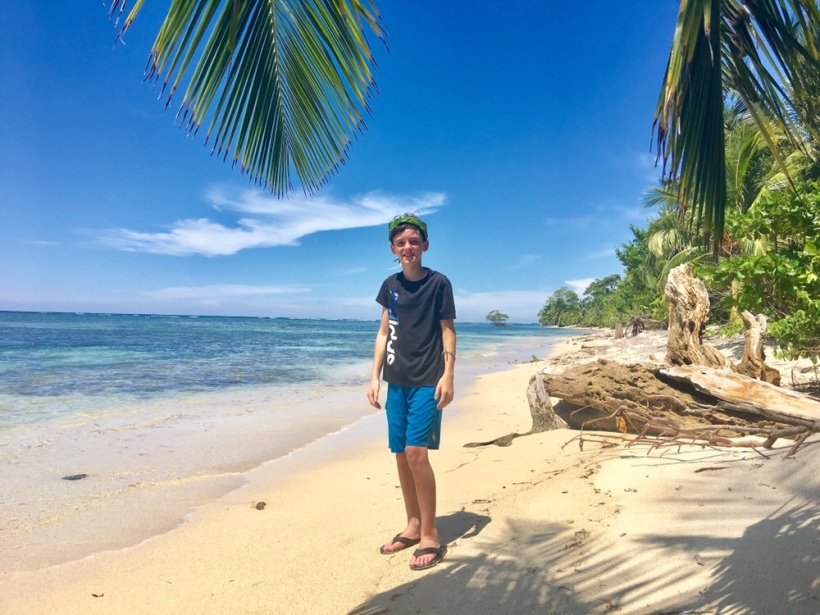 got some local tacos for lunch… 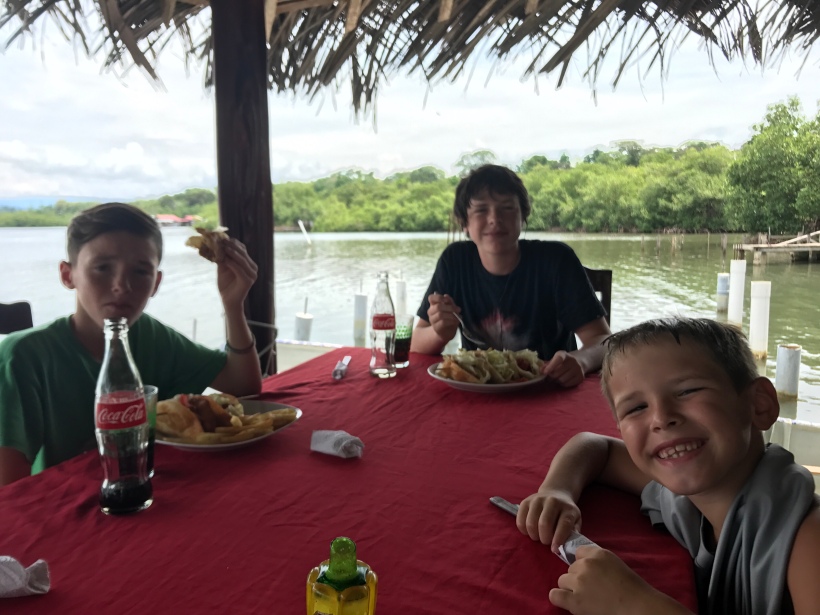 and anywhere else we wanted to go.  They were great with the boys and even taught them how to drive the boat! 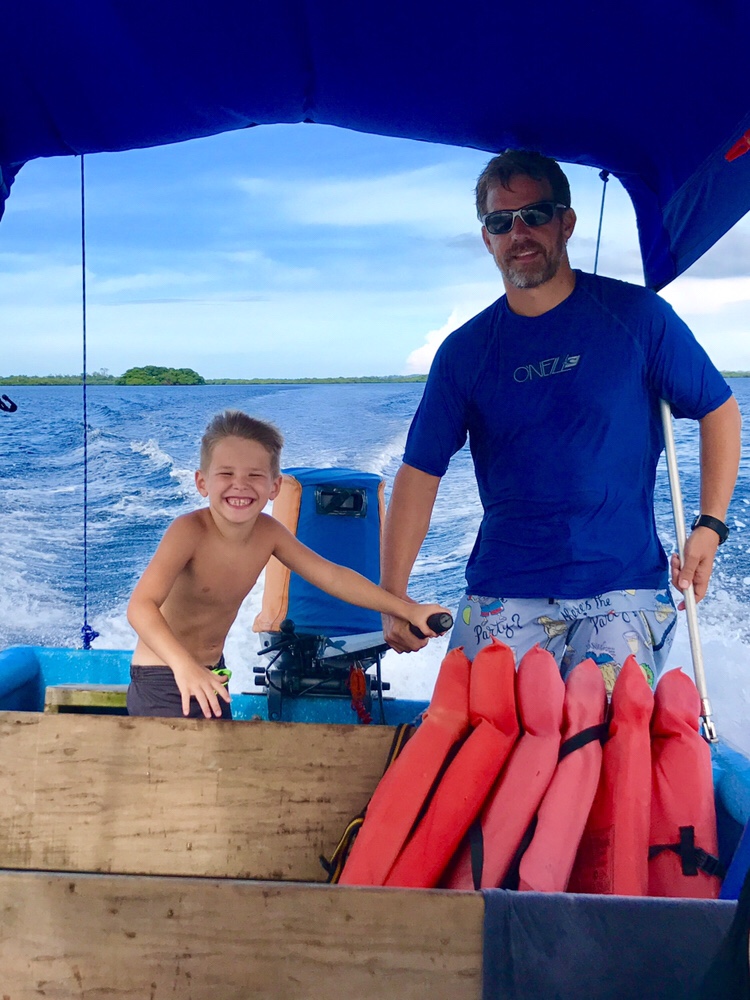 Although the place we were staying functioned completely off the grid, it was really quite lovely.  They used solar power for energy and reclaimed their water.  If only there was air conditioning, it would have been perfection and we may never have left.  We were able to keep cool though snorkeling, swimming, drinking fresh made tropical drinks, and relaxing in the pool.  We played games and enjoyed the solitude. The grounds were beautiful and it was fun to learn about the tropical plants.  I especially loved the water lilies that bloomed only at night.  The boys had fun catching the poison dart frogs (this is ok as long as you wash your hands after) and other jungle critters. 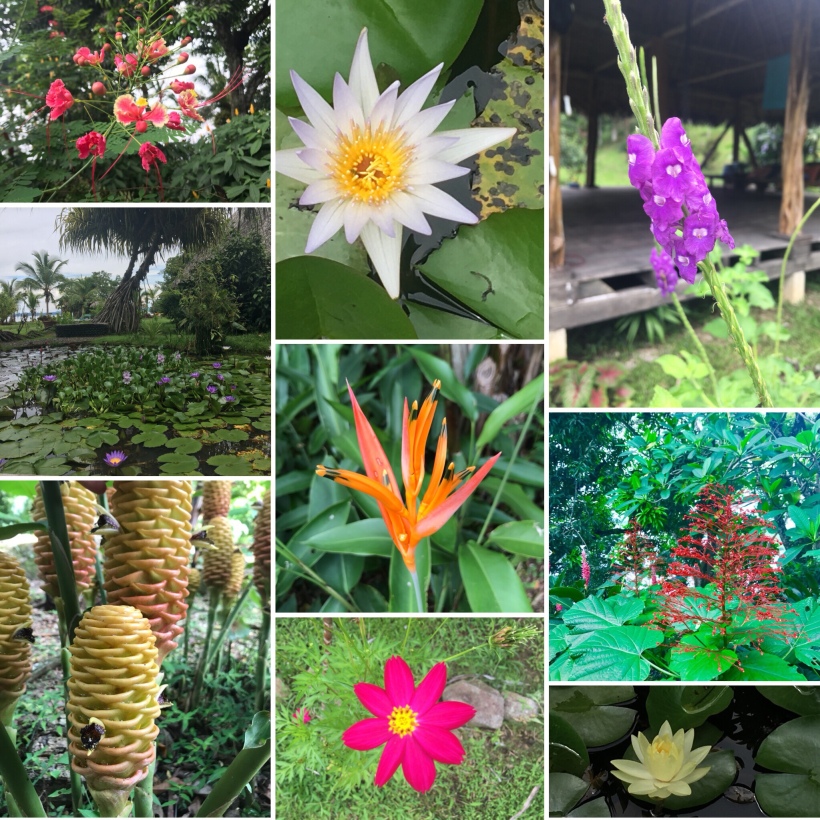 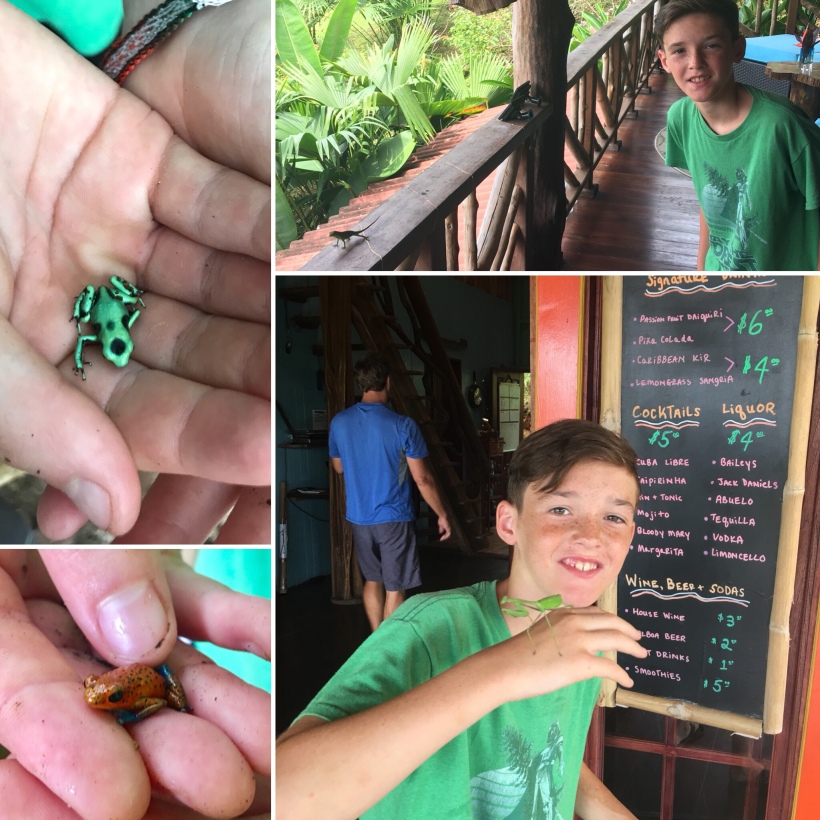 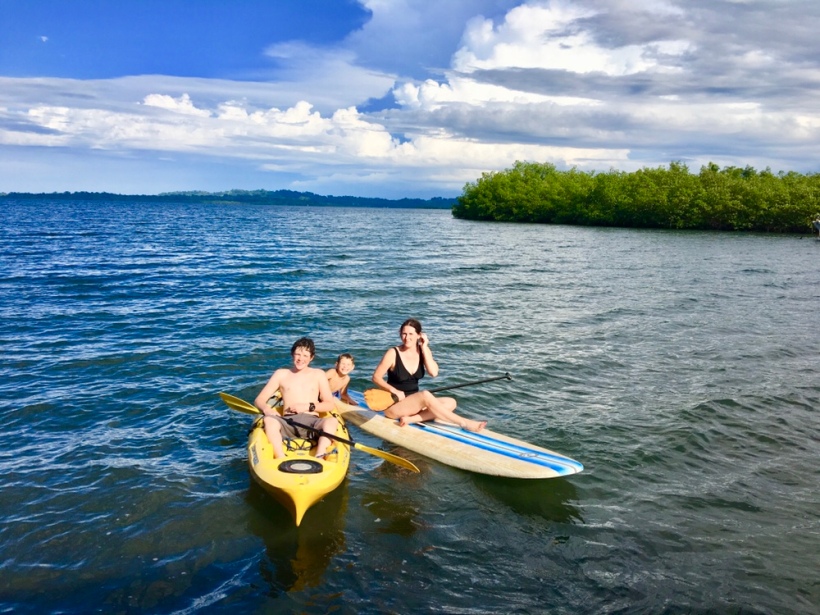 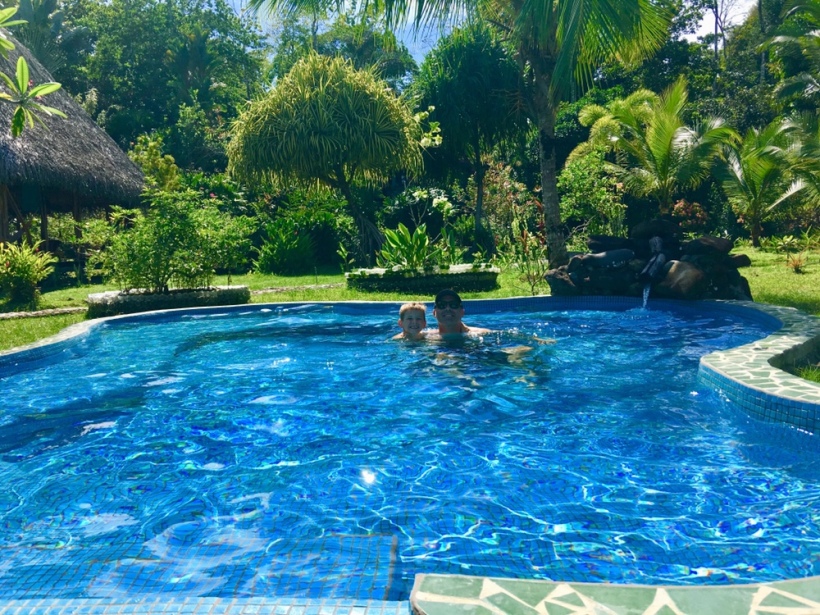 We met a few different groups of Americans who chose to leave busy life in the USA for a quiet, simple life in Bocas.  One couple purchased a Cacao farm and ran tours of it for visitors.  We enjoyed hearing their stories of living in the jungle in Panama, especially about the “cleaner ants” that invade the house by the thousands and eat all the bugs they find, then leave on their way, only to return again for another day or two the next year!  While touring we saw wild sloths and poison dart frogs.  He even got us to try eating some termites…tastes like parsley…who knew?!

We also had the opportunity to visit a local school that was on the same island we were staying on.  The kids from many surrounding islands rowed in hollowed out boats to and from school every day.  The boys loved checking out these local “school buses.”  It was even more impressive when we learned that most the kids in the area don’t learn how to swim!

Jeromy was able to use some of his dental skills and taught the school children the importance of flossing and brushing as we handed out toothbrushes to each of the kids.  I’m not sure how much they understood, but it was fun.  We showed them where on the globe we were from in relation to where we were at in Bocas Del Toro. At the end of our time there, the kids all sang a song for us and Tyler and I sang a song for them as well.  After a year of worldschooling it was funny that we spent our last day out of the country actually in school. 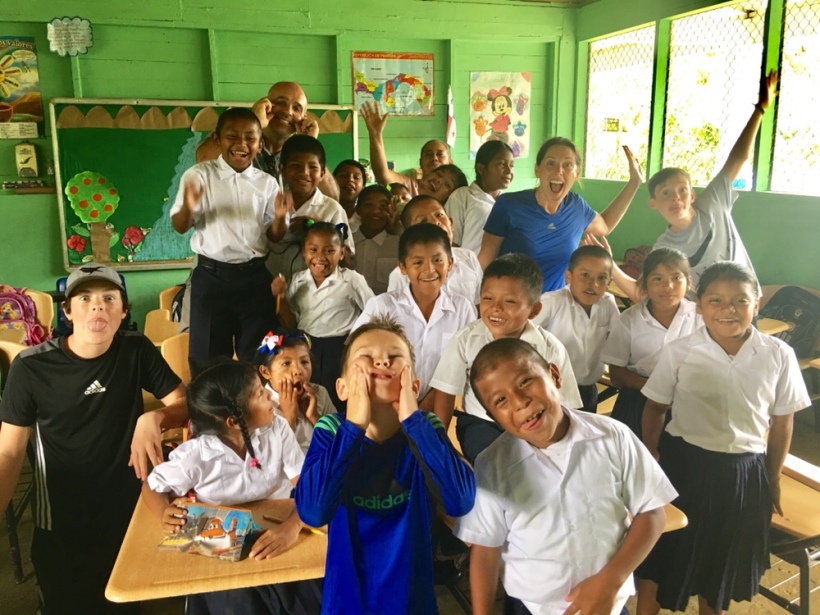 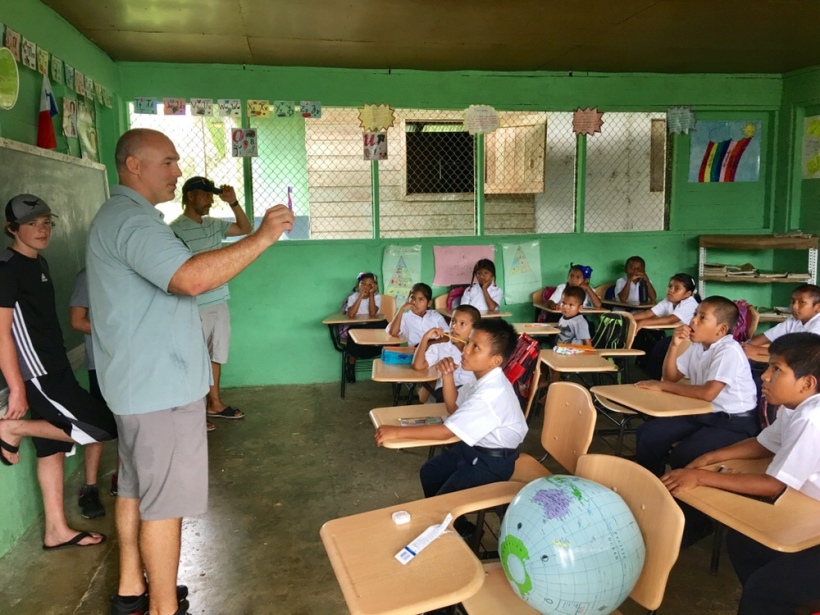 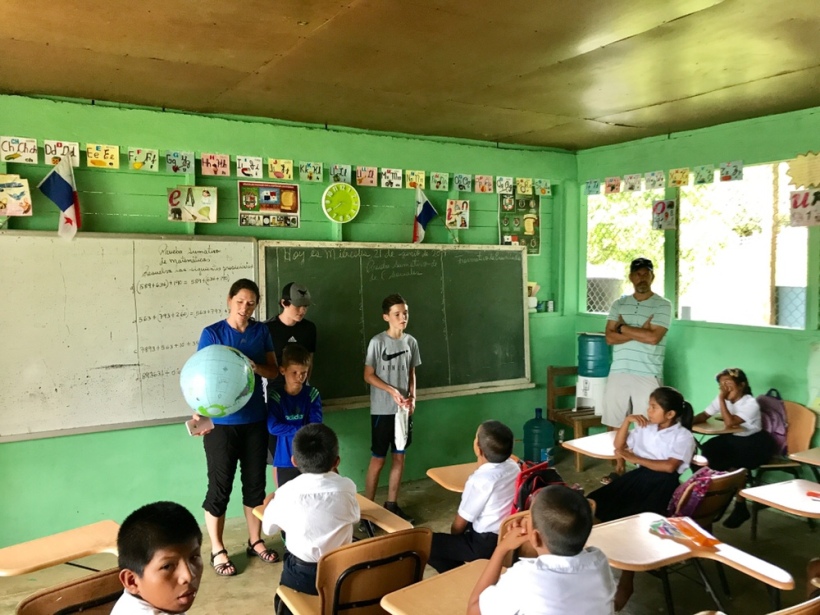 Dolphin Bay Hideaway was a wonderful place to stay, but my favorite part of our time there was in the evenings after dinner when it got dark outside.  There wasn’t a light to be seen for miles and we would walk down to the water.  The sky was full of stars brighter than almost anywhere we had been.  We could easily see the Milky Way streaked across the night sky.  But the most amazing thing was in the dark water in front of us!  As we agitated the water with an oar or our hand, the water lit up with thousands, maybe millions, of bioluminescent plankton.  It was like nothing I have ever seen or experienced before! It looked like the stars from the sky were lighting up the water below.  It simply felt magical.  We would take out the paddle board and kayak, or even dive in and swim with them.  As we paddled along a train of sparkling plankton followed in the wake.  As we swam, they lit up our skin, making us sparkle like diamonds.  We went down every night to see the bioluminescence and each night I was equally awed by this enchanting experience.

Although it was wonderful, after a few days on our island in Bocas Del Toro, we were all ready to hop on the plane back to the good old United States of America!  Visions of burgers and pancakes, clean bathrooms and speaking the same language danced in our heads as we slept that last night before heading home (almost).

One thought on “Out in Panama”